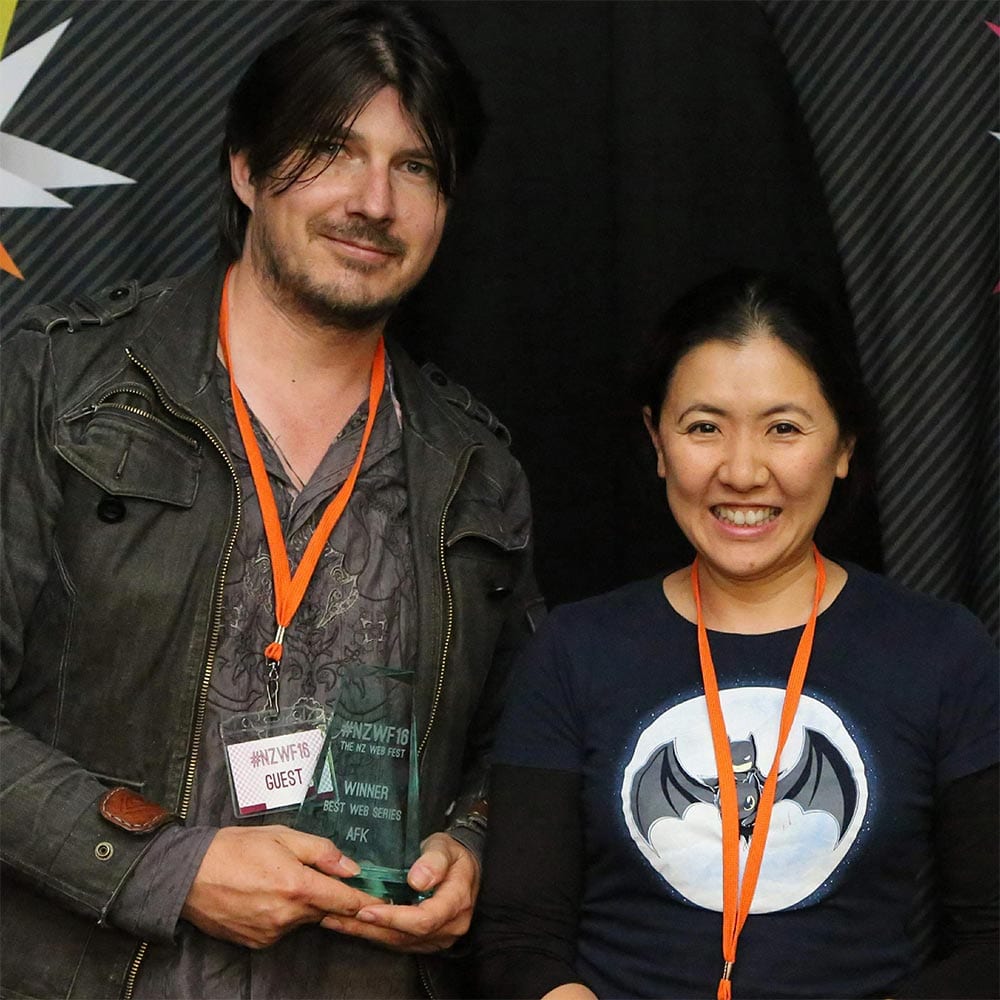 Peter Haynes and Hweiling Ow are the makers of many a 48Hours film, including the winner of Best Script at the 2016 awards. They’re also the creators of AFK, which took out the #NZWF16 award for Best Web Series.

Congrats on the win. What’s been happening with AFK since #NZWF16?
Thank you! AFK is currently being sold to various places around the world. We are patiently waiting to make official announcement. In the mean time, we are quietly working towards season 2 with cautious optimism.

NZ On Air is still the main game in town for supporting web series. Do you have any expectations or concerns about how much web series support there’ll be with the agency’s move to platform-neutral funding?
NZ On Air works really hard at bringing New Zealand made content to a growing online audience. One of the challenges is having a unique voice in a crowded international market, with a lot more niche groups all fighting for everyone’s attention.

There is going to be a transition where YouTube creators and experienced industry people are going to learn about each other’s process and how to potentially create a successful online channel. These are interesting times – as the playing field is changing more and more rapidly. Part of keeping up with these changes is keeping the lines of conversation open with creators – it is and will be more of a dynamic two way shared knowledge experience.

NZ On Air has a priority for New Zealand-based stories, and it should have. At this stage, what’s important for any New Zealand-made web series would be the support of marketing – and getting the word out there about its existence. New Zealanders as a community are very supportive of locally made stuff – but they need to know about it 

Under the H2Ow banner, you were supported last year by the Google-NZ On Air scheme Skip Ahead for Ao-terror-oa. Where’s that at? What should we expect from it and when will we get to see it?
I’d like to mention that the team behind H2Ow is made up of 4 people – myself, Peter Haynes, Nick Burridge and Jonathan Guest. Five years ago, we made this kick ass short film called T is for Talk that helped us get Skip Ahead.

It was a real awesome surprise to get it. I didn’t realise at that time the funding came with a trip to the Sydney’s Google Pop-Up Lab – and the opportunity to use their set to create a Christmas Horror Special. It was amazing. There were a couple of spaces available for the different YouTube creators to create more content for their channels with the help of a professional crew. We agreed we should use the opportunity to create something. With H2Ow – we are planning to create six hero short horror films that are kiwi based leading up to Halloween. These will be complimented with BTS’s of all the shorts, “Hweiling watches…” (I love making horror but I can’t stomach watching it – a terrible paradox on my part!), and a brand new way of teaching SFX makeup with BodyFX. We’re really excited about it all.

What else are you up to at present?
CryptTV got in touch with me about a year ago about T is for Talk and M is for Musical Chairs. From there onwards, we were invited to create some content for them. We’re currently prepping two ’15 Second Scares’ that should be out in February. That will be my first directing debut, so I am quite excited about it.

We are also looking at curating other independent locally made horror shorts that we can add to our playlist or channel. So anyone out there is interested, please get in touch! (*disclaimer – shorts will be accepted based on whether it suits our channel! )

What plans have you got for 2017?
We’ve basically got our hands full. The NZ Film Commission announced right before Christmas they will be calling for horror short film scripts to be part of a women’s horror anthology feature film. I haven’t exactly gone down that route – but I definitely will be doing something about that. T is for Talk, M is for Musical Chairs, the two 15 Second Scares – I planted the initial seed ideas into all those concepts, which was then taken to another level by the whole team – gives me more confidence to pursuit writing and creating more horror. Philosophically, any great story can only happen when you have a great team working together. I know that H2Ow is a super awesome team of super awesome creatives and we are going to be amazing with the work we produce.

In the land of AFK we have created 3 ‘Awakenings’ episodes about when certain characters first wake up in the game and what happens to them. They’re a bit of a teaser for the potential characters for Season 2. We are also quietly working with an overseas party to get the investment for Season 2.